For our 15th anniversary my wife and went to the south island of New Zealand, with a long layover in Sydney. We only had a few hours in Sydney so we went to see the Opera House and then walk through the botanical gardens next door.

As we walked around the harbor I took pictures of the opera house from several different angles. And that got me thinking about the advice I’ve been given both about photography and about my work: make sure you try things from different angles. 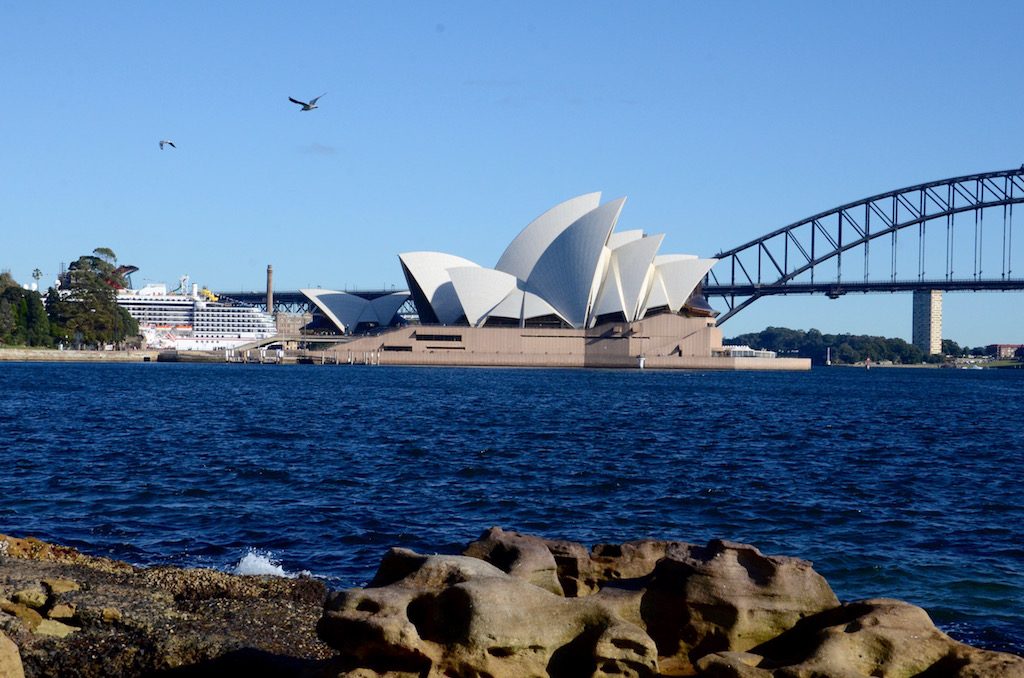 Too often all kinds of experts get into a rut and lose track of the perspective non-experts, and other experts with whom they disagree. Cable news channels like to package those ruts as two talking heads yelling at each other by calling it “debate”.

It’s an easy trap to fall into even without watching the people paid to yell at each other. Sometimes when we look at a problem twice it looks different because we changed something small, and we think we’ve seen all the valid angles. But we’ve just reinforced our sense of superiority not actually explored anything interesting yet.

And sometimes you look from a new angle and something easily recognizable becomes new and different, but that’s not always an improvement. There are reasons for best practices, and sometimes we just reinvent the wheel when we try to break our own path.

And sometimes it is important to think about the extra details that you can capture by changing perspectives and taking the time to figure out the best approach.

But when you take the time to look at things from different angles, perspectives, and positions sometimes you get to discover something you didn’t know to ask about.

For me the best moments are those gems you find when you take the time to explore ideas and view points and discover something totally new. Nothing beats travel to help you remember to change your perspective now and again.

Every few years organizations replace a major system or two: the web site, CMS, CRM, financial databases, grant software, HR system, etc. And too often organizations try to make the new tool behave just like the old tool, and as a result hate the new tool until they realize that they misconfigured it and then spend 5-10 years dealing with problems that could have been avoided. If you’re going to spend a lot of money overhauling a mission critical tool you should love it from day one.

No one can promise you success, but I promise if you take a brand new tool and try to force it to be just like the tool you are replacing you are going to be disappointed (at best).  Salesforce is not CiviCRM, Drupal is not WordPress, Salsa is not Blackbaud. Remember you are replacing the tool for a reason, if everything about your current tool was perfect you wouldn’t be replacing it in the first place. So here are my steps for improving your chances of success:

This is part of my ongoing series about ways Drupal can be badly misused. These examples are from times someone tried to solve an otherwise interesting problem in just about the worst possible way.

I present these at SC Drupal Users Group meetings from time to time as an entertaining way to discuss interesting problems and ways we can all improve.

This one was presented about a year ago now (August 2015). Since I wasn’t working with Drupal 8 when I did this presentation the solution here is Drupal 7 (if someone asks I could rewrite for Drupal 8).

The developer needed to support existing Flash training games used internally by the client. Drupal was used to provide the user accounts, game state data, and exports for reporting. The games were therefore able to authenticate with Drupal and save data to custom tables in the main Drupal database. The client was looking for some extensions to support new variations of the games and while reviewing the existing setup I noticed major flaws.

Create a series of bootstrap scripts to handle all the interactions, turning Drupal into a glorified database layer (also while you’re at it, bypass all SQL injection attack protections to make sure Drupal provides as little value as possible).

There was a day when bootstrap scripts with a really cool way to do basic task with Drupal. If you’ve never seen or written one: basically you load bootstrap.inc, call drupal_bootstrap() and then write code that takes advantage of basic Drupal functions – in a world without drush this was really useful for a variety of basic tasks. This was outmoded (a long time ago) by drush, migrate, feeds, and a dozen other tools. But in this case I found the developer had created a series of scripts, two for each game, that were really similar, and really really dangerous. The first (an anonymized is version shown below) handled user authentication and initial game state data, and the second allowed the game to save state data back to the database.

As always the script here was modified to protect the guilty, and I should note that this is no longer the production code (but it was):

Why is this so bad?

It’s almost hard to know where to be begin on this one, so we’ll start at the beginning.

There are several including:

If I were starting something like this from scratch in D7 I would start with services and in D8 I’d start with the built-in support for RESTful web services. Given the actual details of the situation (a pre-existing flash application that you have limited ability to change) I would go with the custom router so you can work around some of the bad design of the application.

In our module’s .module file we start by defining two new menu callbacks:

The first allows for remote authentication, and the second is an endpoint to capture data. In this case the name of the game is hard coded, but as noted in the comments in the code you could make that a variable.

In the original example the data was stored in a custom table for each game, but never accessed in Drupal itself. The table was not setup with a hook_install() nor did they need the data normalized since its all just pass-through. In my solution I switch to using hook_install() to add a schema that stores all the data as a blob. There are tradeoffs here, but this is a clean simple solution:

You could also take this one step further and make each game an entity and customize the fields, but that’s a great deal more work that the client would not have supported.

The final step is to define the callbacks used by the menu items in hook_menu():

For game_module_auth_user() I use a GET request (mostly because I wanted to show I could use either). We get the username and password, have Drupal authenticate them, and move on; I let Drupal handle the complexity.

The capture data callback does pull directly from the $_POST array, but since I don’t care about the content and I’m using a parameterized query I can safely just pass the information through. drupal_get_query_parameters() is a useful function that often gets ignored in favor of more complex solutions.

The client had limited budget and this was a Drupal 6 site so we did the fastest work we could. I rewrote the existing code to avoid the SQL Injection attacks, moved them to SSL, and did a little other tightening, but the bootstrap scripts remained in place. We then went our separate ways since we did not want to be responsible for supporting such a scary set up, and they didn’t want to fund an upgrade. My understanding is they heard similar feedback from other vendors and eventually began the process of upgrade. You can’t win them all, even when you’re right.

I’m always looking for new material to include in this series. If you would like to submit a problem with a terrible solution, please remove any personally identifying information about the developer or where the code is running (the goal is not to embarrass individuals), post them as a gist (or a similar public code sharing tool), and leave me a comment here about the problem with a link to the code. I’ll do my best to come up with a reasonable solution and share it with SC DUG and then here. I’m presenting next month so if you have something we want me to look at you should share it soon.

If there are security issues in the code you want to share, please report those to the site owner before you tell anyone else so they can fix it. And please make sure no one could get from the code back to the site in case they ignore your advice.