This week we get a letter from Atlantic Broadband, our ISP, addressed to “Aaron & Eliza Crosman Geor”. My wife has never gone by Eliza and her last name is not “Geor”. 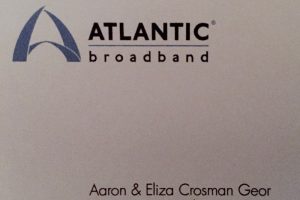 It’s been this way since we signed up with them, when we ask them to fix it they acknowledge that they cannot because their database cannot correctly handle couples with different last names who both want to appear on the account. Apparently it is the position of Atlantic Broadband that in 2016 it is reasonable to tell a woman she cannot be addressed by her legal name because it would be expensive for them to fix their database, and therefore she must be misaddressed or left out entirely.

I consider this unacceptable from old companies, but Atlantic BB was founded in 2004 – there are probably articles about not making assumptions about people’s names that are older than their company.

Folks, it is 2016, when companies insult people and then blame their databases it is because they do not consider all their customers worthy of equal respect.

So let’s get a few basics out of the way:

Of course Atlantic isn’t the only company that does this: Verizon calls me Elizabeth in email a couple times a week because she must be primary on that account (one person must lead the family plan), and Nationwide Insurance had to hack their data fields for years so my wife could appear on our car insurance card (as required by law) every time we moved because their web interface no longer allowed the needed changes. The same bad design assumptions can be insulting for other reasons such as ethnic discrimination. My grandmother was mis-addressed by just about everyone until she died because in the 1960s the Social Security Administration could not handle having an ‘ in her name, and no one was willing to fix it in the 50 years that followed SSA’s uninvited edit to her (and many other people’s) name.

In all these cases representatives all say something to the effect of “our computers cannot handle it.” And that of course is simply not true. Your systems may not be setup to handle real people, but that’s because you don’t believe they should be.

Let’s check Atlantic Broadband’s beliefs about their customers based on how they address us (I’m sure there are some additional assumptions not reflected here but these are the ones they managed to encode in one line in this letter):

Now I’ll be fair for just a minute and note something they got right: they allow & and spaces in a name so Little Bobby Tables might be able to be a customer without causing a crisis (partially because his name is too long for them to fit a valid SQL command into the field).

Frequently you’ll hear customers blame themselves because their names are too long or they have done something outside the “norm”. Let’s be clear: this is the fault of the people who write and buy the software. Software development is entirely too dominated by men, as is the leadership of large companies. When a company lacks diversity in key roles you see that reflected in the systems built to support the work. Atlantic’s leadership’s priorities and views are reflected in how their customers are addressed because they did not demand the developers correct their sexist assumptions.

These problems are too common for us to be able to refuse to do business when it comes up. I will say that when we switched our insurance to State Farm they did not have any trouble understanding that we had different last names and their systems accommodated that by default.

If you do business with a company that makes these (or other similar mistakes) I think it’s totally reasonable to remind them every time you reasonable can that it’s offensive. Explain that they company is denying you, your loved ones, and/or your friends a major marker of their identity. Remind them they are not neutral.

If you write data systems for a living: check the assumptions you’re building into your code. Don’t blame the technology because you used the wrong character set or trimmed the field too short: disk is cheap, UTF-8 has been standard for 15+ years, and processors are fast. If the database or report layout doesn’t work because someone’s name is too long the flaw is not the name.